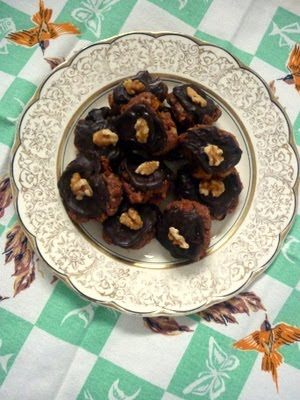 As Jack Frost is beginning to show his icicle-y whiskers (yes, even in sunny Queensland!) we find ourselves retreating indoors after mornings in the gentle Winter sunshine. 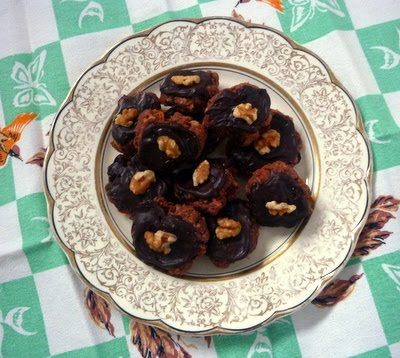 Washing on the line, pottering in the vegie garden, train rides on the see saw to visit Daddy in the city for sushi (ah, imagination!).... 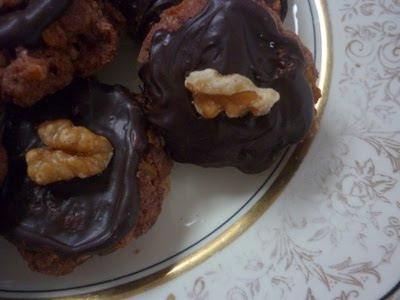 As soon as my babe's head hits the pillow for her afternoon kip, the kettle is on. My chilly hands yearn to cradle a mug of steamy tea (no dainty little cup is going to cut it!). And my taste buds want chocolate! Crispy, decadent afghan biscuits are just the ticket for overcast, snugly days.

Preheat oven to 180 degrees C. In a mixing bowl, cream butter and sugar until light and fluffy.

Sift in flour and cocoa, and mix. Fold in the cornflakes and crushed walnut pieces until just mixed.
Line a baking tray with baking paper. Spoon mounds (as big or small as you like) onto tray. I squished mine into wonky balls first and then flattened a little. Bake for about 15 minutes until just set. Try not to dry them out too much, as it's already a crumbly biscuit.
When the bickies have cooled , ice each on with a generous dollop of chocolate and top with a walnut half.

Virtuously pop one or two on a plate to have with a cuppa.....and then tiptoe back to the tin for another few when you've gobbled them up!

I can vouch for these.

Thankyou my lovely friend for the soup and biscuit delivery. You are a treasure.

They look like they would take the chill away nicely, Steph!

I love that cookbook too. I love everything that Frankie does. Not a day has gone by this year when I haven't lovingly stroked my Day Planner and just sighed a little. x

Oh do you think you could send my husband a batch when he goes back to Afghanistan?? They look delicious!! Since my mother got Alzheimer's she doesn't bake for the soldiers anymore (well her favourite one). Now i'm hungry, nighty night, love Posie

My favourite biscuits ever! And I'm with you on the need for a mug of hot tea in the afternoon hush of naptime!

Yum, they look delicious! My great aunt makes these but I have never been able to replicate them successfully. I shall try your recipe during the school holidays-thank you!

Thanks we made these last night and they were a hit with everyone. I substituted walnuts for almonds. Thanks Stacey

Hello gorgeous! Just popping over from Mira Narnie... those biscuits look delicious! It's baking day tomorrow with my lads, and now I'm tossing up between Brenda's lemon slice, or these babies.

Steph
Salut! I am a stay at home Mumma to my gorgeous poppets, Bijou and Remy. Once a passionate teacher of little preppies, I now devote all of my time to my beautiful little family. I am blissfully married to my "soul buddy" and with our babes in tow we set about lapping up all that this amazing life has to offer. I adore all things crafty and find such joy in beautiful fabrics, books, Baroque music, eating chocolate, eating cake...eating fullstop!, all things French ,my Mum and Dad, vintage buttons and habby, flea markets and antique shops, baking, Sunday breakfasts, rainy afternoons, demolishing with a crow bar, fashion, Audrey Hepburn movies, watching my man with our girl, long baths til I go pruney,...life!!. Still finding my feet as a stay home Mumma and a crafter I'd love for you to join me on this journey. À bientôt!